Great Britain recently announced the appointment of Moya Greene to the position of Royal Mail’s CEO. Not only does it make her the first woman to occupy this position, but she is also the first person from “abroad” to become CEO of the company.

Her former CEO position at Canada Post, taken up in May 2005 from her predecessor, André Ouellet, proved to be a very profitable venture for them, since she managed to keep the Crown’s corporation in constant profit generation, year after year, by mainly cutting down operational costs and by streamlining the mail delivery processes with automatization.

Her expertise in privatization systems for companies seems to have been the triggering element for being selected over two other finalists for the job.

Upon reading the article written by the editor of Canadian Stamp News, Bret Evans, titled “Royal Mail Going Greene“, I learned that Mrs Greene will be paid half the sum her predecessor was earning for the same position.

Is the reason behind this fact caused by gender?

Here’s the explanation given by Ian King and Robert Lindsay in the May 27th, 2010 Times edition: 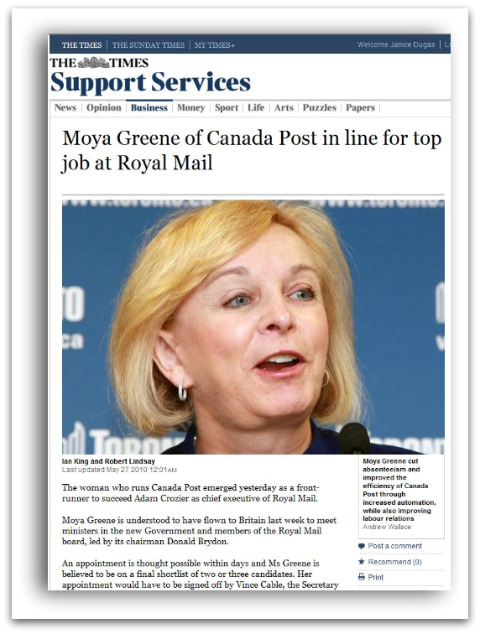 Article written by Ian King and Robert Lindsay - The Times- May 27,2010

“Royal Mail would be a far bigger job for the Newfoundland-born Ms Greene. It is twice the size of Canada Post, with nearly 193,000 employees and 14,300 post offices.

If appointed, Ms Greene would be likely to receive a lower salary than the £995,000 that Mr Crozier earned during 2008-09, the latest year for which figures are available. David Cameron made it an election promise that, in general, heads of public sector bodies should not be paid more than 20 times the salary of the lowest-paid employees of their organisation”

No wonder prices are constantly increasing for postal services, be it for stamps supply or specialized delivery services…Gee wizz!