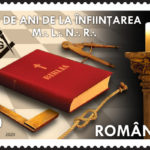 On the occasion of the 140th anniversary of the existence of the National Grand Lodge of Romania, commemorative postage stamps were released to celebrate its establishment. The issue, consisting of two postage stamps and a perforated souvenir sheet, brings to the attention of passionate stamp collectors’ novel aspects of the existence and activity of this fraternal society. Masonry as we know it today, has arrived in Romania at the beginning of 17th century, coming from Istanbul along with the ships … END_OF_DOCUMENT_TOKEN_TO_BE_REPLACED

. June 8, 2012 : Canada Post commemorates the 250th anniversary of the official establishment of the town of Torbay, in Newfoundland. The history of the town of Torbay, Newfoundland, dates back to 1500s. The town took its name from a coastal town in Devonshire, England, four centuries ago. The census of 1677 indicated residents living in “Tarr-Bay” Newfoundland; by 1794, the population totalled 108 English settlers and 99 Irish settlers. Torbay was officially established soon after Colonel William Amherst … END_OF_DOCUMENT_TOKEN_TO_BE_REPLACED