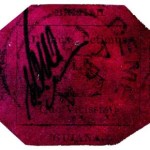 In a recent article on ThinkAdvisor‘s website, Keith Heddle, global head of investment with Stanley Gibbons, talks about several forces supporting the demand for rare stamps, at least for the foreseeable future. ” (…) The first—no surprise here—is demand from wealthy Chinese collectors and investors. Speaking simplistically, he says, many of them have accumulated sufficient “bling” assets and are seeking something “a bit more considered and less flashy.” One reason for this cohort’s interest in stamps was Chairman Mao’s ban … END_OF_DOCUMENT_TOKEN_TO_BE_REPLACED

John E. du Pont, famous stamp collector and philatelist, owner of the rare 1856 British Guiana One Cent Magenta Stamp (bought at auction for US$ 935,000) sentenced to prison in 1997 for the irrational murder of an Olympic wrestler, David Schultz, died in prison Thursday morning, December 8th, at the age of 72. “Mr. du Pont was found unresponsive in his cell at Laurel Highlands State Prison near Somerset, Pa., a prison spokeswoman told The Associated Press. “He had had some … END_OF_DOCUMENT_TOKEN_TO_BE_REPLACED