. June 8, 2012 : Canada Post commemorates the 250th anniversary of the official establishment of the town of Torbay, in Newfoundland. The history of the town of Torbay, Newfoundland, dates back to 1500s. The town took its name from a coastal town in Devonshire, England, four centuries ago. The census of 1677 indicated residents living in “Tarr-Bay” Newfoundland; by 1794, the population totalled 108 English settlers and 99 Irish settlers. Torbay was officially established soon after Colonel William Amherst … END_OF_DOCUMENT_TOKEN_TO_BE_REPLACED 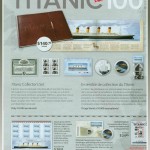 In commemoration of  the 100th Anniversary of the TITANIC fateful history, several postal administrations will be issuing commemorative postage stamps and related collectibles that tells the story of the largest ship ever built, and the tragedy that fell upon its passengers and crew members. Stepping back in time…   In 1904, the first wireless station in Newfoundland was built at Cape Race. This was the only land-based location that received the distress call from the RMS Titanic. On the … END_OF_DOCUMENT_TOKEN_TO_BE_REPLACED