Imagine my surprise when I discovered this morning a Yellow-shafted flicker woodpecker working out his nest in a dead branch of the maple tree in our backyard!  Wow… I grabbed my camera and quickly shot this video. Click on the arrow below to check him out!

He knows I’m there but still continues to peck… Isn’t he gorgeous?

As you may guess, I immediately asked myself if this beautiful bird was depicted on postage stamps. 😉

I googled the term and found out that the United States commemorated the 150th Anniversary of the Alabama State with a Yellowhammer bird in the design. Are they the same?

The 6-cent stamp commemorating the 150th anniversary of Alabama statehood was first placed on sale on August 2, 1969, at Huntsville, Alabama, the state’s first temporary seat of government. The initial printing order of 120 million stamps was authorized.

This stamp reproduces the state flower, the camellia, and the state bird, the yellowhammer. It was the winner in a design competition conducted in Alabama in which Bernice Kochan of Cleveland, Ohio, produced the top entry. Pink and yellow were applied in the first pass through the offset press, and red in the second. Red, brown, and green were printed by the Giori press.Reference:

I also glanced through the canadian bird stamps issues, but only found  the Hairy Woodpecker. 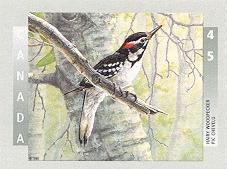 Do you know of any other country postal administrations that featured the Yellow-shafted flicker on their postage stamps? If so, kindly leave a comment below. 🙂 I would be delighted to know.

Upon researching furthermore, I came across a website maintained by Chris Gibbins since 1998 that lists all the birds of the world on postage stamps! It’s truly a priceless resource for all birds on stamps collectors as you can now easily create your birds on stamps checklists and want lists,  by country and by species. A virtual paradise for bird topical stamp collectors. 😉

Many thanks to Mairiuna, loyal reader of the blog, who sent us an image of a Cuba stamp depicting the Northern  Flicker. 🙂 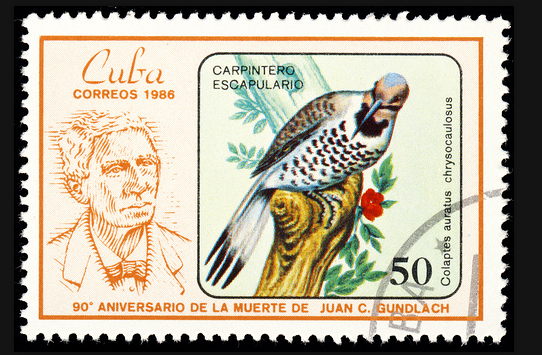 She also sent a very beautiful picture of one of  John James Audubon’s  famous birds series.

“Other common names for the Yellow-shafted Flicker are: High-hole, yarrup, yocker-bird, harry wicket, wilcrissen and yellowhammer. The scientific name is Colaptes auratus.

They breed throughout eastern North America, east of the Rocky Mountains and north to the tree limit in Canada and Alaska.

The yellow-shafted flicker is a woodpecker, though one that has not taken up woodpecker ways entirely. It often feeds on the ground, and consistent with such an habit, its plumage is a protective brown instead of the usual black and white of most other woodpeckers.

Its bill is not stout and chisel-like either. The sligth curve indicates it is used more often for poking about anthills than for hacking.

Nor is its tongue barbed like a spear. Ants are too small to stab, and the flicker uses other methods. Standing on an ant-hill it extends its long , sticky three-inch tongue down into the hill, waits until it is swarming with victims, then pulls it in. As many as 5,000 of the little insects have been found in the stomach of  one flicker. 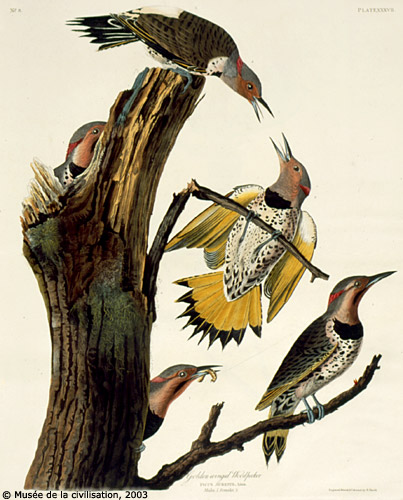 Flickers are wide-ranging birds and will nest wherever there are trees. Although yellow-shafted flickers, like kingfishers, have been known to dig holes in the banks of stream, and even lay their eggs on the ground, they are primarily hole-nesters in the dead limbs of trees.

They are skillful and painstaking carpenters. Because of the great amount of time taken in hewing out a suitable home, the flicker is reluctant to give it up. Sometimes, the same hole is used year after year, unless a starling or screech owl has established itself before the flicker owner returns in the spring.”