Stamp Collecting and Philately In The News

Mbachu was joined by several classmates and members of Cathedral International Thursday for the Perth Amboy unveiling of the Rosa Parks forever commemorative U.S. postage stamp. The stamp unveiled during a Black History Month celebration at the Alexander Jankowski Community Center is based on a 1950s portrait of Parks. Forever stamps never lose their value as a first class stamp even if the price increases.

“The U.S. Postal Service has paid tribute and featured African American leaders, inventors, educators, scientist, entrepreneurs, entertainers and athletes on stamps for years. We are here today to honor one of the heroes of the civil rights movement, Miss Rosa Parks,” said Priscilla Maney, U.S. Postal Service northern N.J. district manager. “Few acts of civil disobedience did more to change the course of history than the afternoon in 1955 when Miss Parks refused to move to the back of the bus. By staying seated she inspired millions more to stand up,’’ she said.

Parks received the Presidential Medal of Freedom and the Congressional Gold Medal. When she died in 2005 she became the first woman and the second African American to lie in state in the U.S. Capitol rotunda in Washington, D.C., Maney said.

“Her courage and inspirational efforts are why the postal service is proud to honor Miss Parks with a new forever commemorative stamp,’’ said Maney, adding the stamp is the second in a series of three marking milestones in the American Civil Rights Movement. An Emancipation Proclamation commemorative stamp was released last month and a March on Washington stamp will be released later this year. 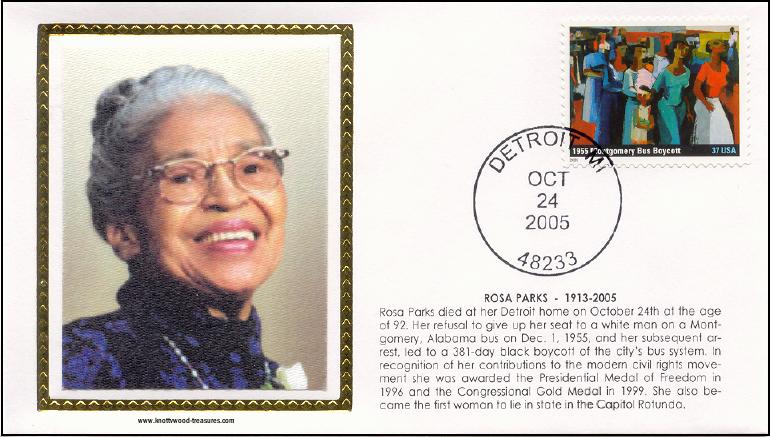