Topical stamp collecting is such a thrilling and fascinating hobby! As an example, let me tell you what happened yesterday.

Being a topical stamp collector of many subjects, but primarily of  ‘Unicorns on Stamps’ and ‘Scotland on Stamps’, I performed  the indian “rain dance” ! following my view of the video (see below) taped during the AM Northwest TV Show hosted by Helen Raptis and Dave Anderson.

The show was about stamp collecting and featured rare and valuable postage stamps and truly philatelic gems. When Alex Haimann from Mystic Stamp Co showcased the USA $1.00 “Western Cattle In The Storm” from the 1898 TransMississipi’s set of stamps and mentioned that it was one of the most beautiful USA stamp, I decided to google it and found out…. 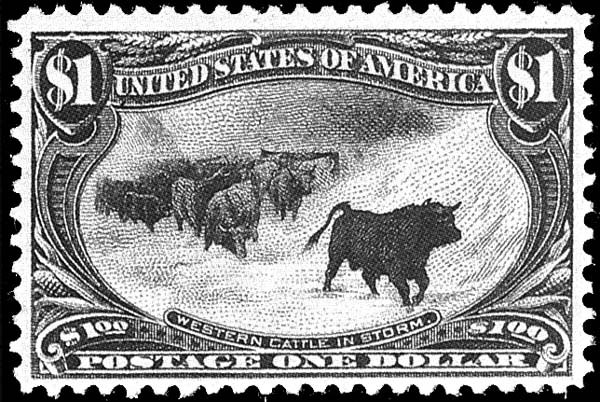 => that the scene depicted on the Trans-Mississippi’s $1 value originates from a painting of  John A. MacWhirter, a scottish painter!

I had stumbled upon a stamp that fits perfectly on my Scotland on Stamps topical collection checklist ! 🙂

Hum…the price is quite steep though, so I guess I will post it on my Amazon wish list and hope  for the best. (wink wink) 😉 or try to find a spacefiller ( a stamp in poor condition, to be kept until a better copy can be found at a better condition and price.)

Isn’t it cool? It surely is…..and stamp collecting is an hobby that can fullfill you with happiness, no matter which subjects you decide to collect, as topical stamp quests are nothing less than fun.

“.. and (it) was reported to have been used in the west by a cattle company as a sort of trade mark. Prints had been made and sold, and it was one of these prints that had come to the attention of the Post Office Department and designer Smith.

MacWhirter, however, was a Scot, and his painting, entitled “The Vanguard,” was soon discovered to have been a depiction of Scottish cattle in a storm in Scotland.

It was actually painted in a small farmhouse near the Scottish highland town of Calendar. The scene did not depict an event west of the Mississippi, but it might have been, and few really cared about this detail, for cattle were an important part of the western U.S. economy, and the design was certainly pleasing enough.   Source: Chicago Stamps

Needless to say that there is much controversy about  the “Cattle In The Storm” stamp being considered the most attractive stamp of the USA.

Now…do watch the video below to discover which USA stamps fetches $3,000,000. on the philatelic market. 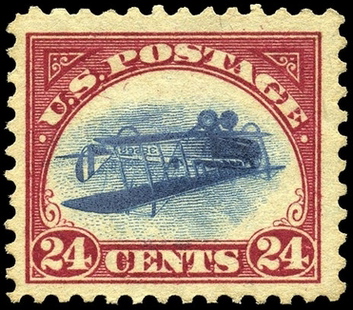 By the way, I totally agree with Fred Baumann, Director of Public Relations for the American Philatelic Society (APS) about bringing in youth into the stamp collecting hobby, as they will, further down the road, re-connect with their hobby.

At the turn of the century, we were bootholders at many of the Canadian and American Philatelic Stamp Show & Exhibitions, and it was always a pleasure to see younger ones sit at our tables and go through our topical stamps. And believe me, they knew what they wanted to collect. Most popular topics were dinosaurs, pets, animals, olympic games, trains, airplanes, music, disney and movies, to name just these few.

Whenever you have the opportunity to introduce someone to stamp collecting, be it collecting the traditional way, i.e. by country, or topically, by subjects, you will introduce them to a hobby that is so fascinating and rewarding, they’ll thank you for ever!

Did you, at one point in time, ever considered collecting stamps?

Do leave a comment below as I would love to read about it.