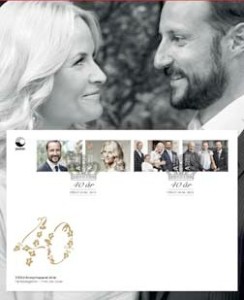 Haakon turns 40 on July 20 and Mette-Marit on August 19. They each received a stamp of their own with a value of NOK 9.50 or A Innland (USD 1.58), good for a standard letter or postcard sent first-class within Norway.

On the two other stamps in the series released earlier this month is a photo of the crown couple with their children and a photo of Crown Prince Haakon with his father, King Harald V, and daughter, Princess Ingrid Alexandra. It illustrates the monarch and his line of succession.

The stamps were designed by stamp artist Enzo Finger based on photos of the crown couple by Sølve Sundsbø, of the family by NTB Scanpix photographer Erlend Aas and of the king and his heirs to the throne by Julia Marie Naglestad. The stamps were printed in the Netherlands with a press run of 2,595,000 each, according to the postal service.

‘Of interest to stamp collectors of Norway,  these comprehensive and engaging slide shows showcase an extensive collection of Scandinavian stamps. Concise introductions are provided before guiding the audience through more than 100 years of philately from the diverse countries of Norway and Greenland. 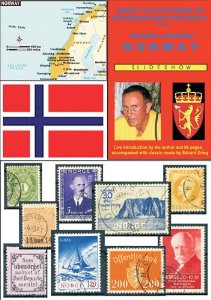