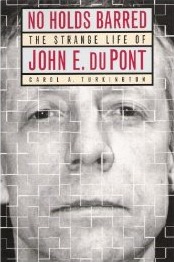 John E. du Pont, famous stamp collector and philatelist, owner of the rare 1856 British Guiana One Cent Magenta Stamp (bought at auction for US$ 935,000) sentenced to prison in 1997 for the irrational murder of an Olympic wrestler, David Schultz, died in prison Thursday morning, December 8th, at the age of 72.

“He had had some illnesses, so we are considering it natural,” Susan McNaughton, the spokeswoman, told The A.P., adding that the Somerset County coroner would make the final determination of the cause of death.

The British Guiana 1c Magenta stamp housed in his collection, being unique, holds the title to the rarest stamp in the world, as reported below in The New York Times article.

We can imagine that offers will be presented to his Estate. 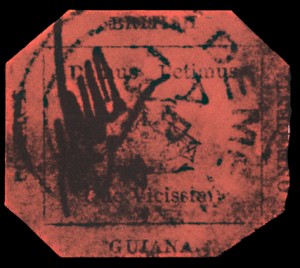 The original stamp, a one-cent issue crudely printed with black ink on lilac-colored paper, is one of the icons of the hobby, largely because of the tradition that it was found by a Scottish schoolboy in 1873 and sold to a local dealer for six shillings (about $1.60 in those days). It is now owned by a murderer.

The second copy, whose existence is being reported in the next issue of Stamp Collector, a fortnightly newspaper, reportedly turned up in Romania in the mid-1980’s, when it was bought by an unidentified dealer from Bremen, Germany. The German dealer said the seller, a dancer, had inherited the stamp in a collection from her grandfather, who was a servant to a Russian nobleman.

Initial microscopic tests have been conducted by David Feldman, a prominent Swiss auctioneer of rare stamps and coins, and show that the paper and ink are appropriate to a stamp issued in 1856. Further tests could take a year, Mr. Feldman added.

Mr. Feldman was the auctioneer for what is currently the most valuable stamp ever sold, the Swedish Tre Skilling Yellow, an 1855 stamp that was printed in yellow rather than its normal green. He sold that stamp in November 1996 for $2.3 million (including his commission), after verifying that the yellow color was not due merely to the fading of a stamp that had originally been green.

A small number of the British Guiana stamps were produced by a local newspaper printer when supplies of the original one-cent issue, which had been produced on high-quality paper in London, ran out.

According to the stamp’s lore, it was found by a 12-year-old Scottish lad named Vernon Vaughan in 1873. It was still attached to a piece of paper, so the boy soaked it off, and the poor quality of the stamp’s paper became more evident.

Vernon sold the scruffy stamp to N. R. McKinnon because the boy wanted to buy better-looking stamps for his collection. (What may be the second known copy is also scruffy.)

Within a few years its rarity came to be recognized, and it passed through the hands of several prominent stamp collectors: Count Phillippe von Ferrari of Paris, Arthur Hind of Utica, N.Y. (who paid $35,250, a record stamp price, in the 1930’s), and Frederick T. Small of Fort Lauderdale, Fla.

The syndicate sold the stamp in 1980 for $935,000 to a buyer who was anonymous at the time but whom Stamp Collector and others have identified as John E. du Pont.

Mr. du Pont, a well-known collector and a du Pont heir, was convicted in February 1997 of shooting and killing an Olympic wrestler whom he had sponsored, and was sent to a hospital for the criminally insane.