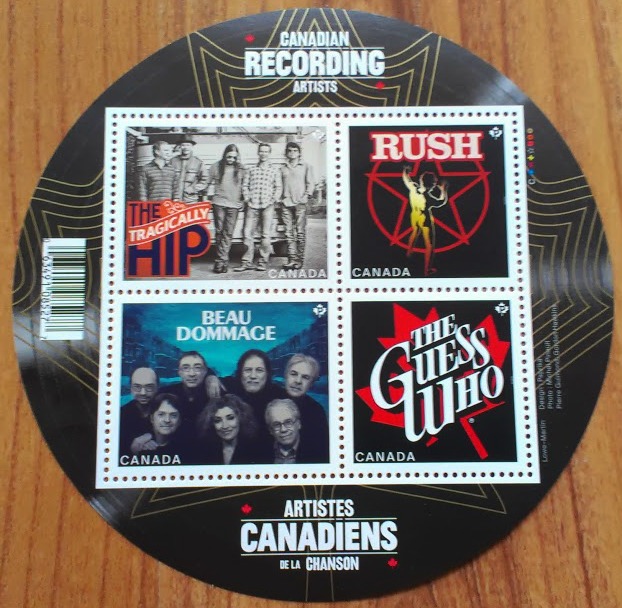 Probably not the issue for which I would vote “best of the year” but something very interesting did trigger my attention in this set of stamps that woud fit just lovely inside a music on stamps topical stamp collection!

For people who know me, there is no secret that I LOVE first things, aka #1’s . First of this..first of that…etc. Don’t ask me why, it just caches my fancy 😉

So, when I stumbled upon the article featured on CityBeat.com, (see excerpt below) I could absolutely not let pass this opportunity of adding another #1 on my stamp collecting and philatelic #1’s list. And before I tell you what it is, gotta say that I also hit the jackpot with this one stamp issue because it contains not one, but two ‘#1’s !!

Wanna know what they are?

– >First Canadian stamps to feature bands rather than individual performers

In 2011, the U.S. Postal Service announced that they would finally allow living people to be portrayed on U.S. postage stamps, reversing a long-standing rule.

A blatant marketing move, the USPS still hasn’t delivered the first such stamp.

But in Canada, they’ll put almost anyone on their stamps. Gordon Lightfoot, Michael J. Fox and Bobby Orr have all had non-posthumous Canadian stamps in their honor and now new Rock and Roll Hall of Fame members Rush join their company. Sort of.

The new Rush stamp (released alongside ones honoring The Guess Who, The Tragically Hip and Beau Dommage) features the band’s name and the “star man” logo — a naked man (from behind) in front of a satanic-looking star in a circle. It’s the first ass to appear on a Canadian stamp (…Read more)….

The Canadian Recording Artists stamp series along with First day covers and set of Postcards can be purchased from Canada Post retail outlets and online via CanadaPost.ca.

Hope you enjoyed the read.

Wishing you many stamping hours this week.