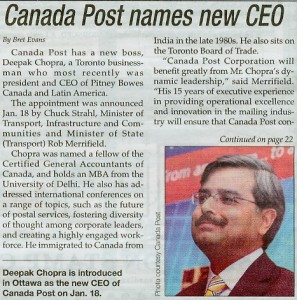 On the first page on the Canadian Stamp News that came in today, my eyes were drawn to the headline: ” Canada Post names new CEO” and the first sentence: “Canada Post has a new boss, Deepak Chopra..”

What? Deepak Chopra?!!?? The author known worldwide for his books on the subject of self-development and wellness?

Wow..did not know he had this type of business skills!

When speaking to my friend over the phone, I announce the news and shared my great surprise!

But.. thinking about it twice and looking at the picture published, I started to have serious doubts….

To check it out I googled his name and found an article in the Montreal Gazette written by Jennifer Campbell: “ Deepak Chopra to head Canada Post” in which she states:

Chopra should not be confused with the best-selling author and wellness expert.

Moya Greene, who became CEO in 2005, is credited with bringing Canada Post into this century by introducing new equipment, technology, vehicles, training programs and efficiencies. She oversaw, for example, a $2.1 billion investment in aging infrastructure that had only been maintained piecemeal since the 1970s and achieved the above profits through cuts of $540 million while revenues ($7.3 billion in 2009) actually dropped.

Mail services the world over have been facing dropping volumes, in large part thanks to email and on-line banking. Canada Post recorded its first overall volume drop in 2009, from 11.8 billion pieces in 2008, to 10.8 in 2009 and it now has to prepare for a more paperless future.

And while revenues and volumes of mail have dropped, costs haven’t.

Analysts who spoke about Canada Post after Greene left said she’d done a good job but that there was more to do so the new CEO faces serious challenges in running a corporation whose main business is being threatened by changing times.

Mount Allison University president and political scientist Robert Campbell conducted a 2008 independent examination of the mail service that concluded Canada Post is in reasonable shape compared to other postal services but that its future is uncertain.

Gotta call my friend back and “unsay” my announcement…as there were an “erreur sur la personne”!