As Jim Phillips, Director Stamps Services at Canada Post wrote inside Canada’s Stamp Details (Vol. XXI No 1; January to March 2012:   “2012 roars in like a dragon”.  😉 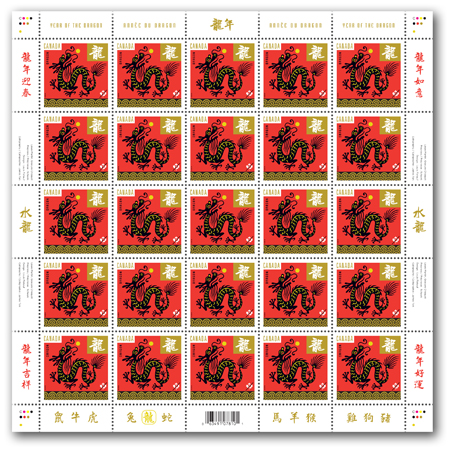 On Canada Post‘s website, the stamp are presented as follows:

“Thinking of dragons may conjure up fire-breathing, serpent-like beasts of fantastic legends, but in many Asian cultures, these magical, mythical creatures are benevolent, associated with wisdom and longevity. They are revered for their influence over the primal forces of nature; for example, the Chinese water dragon has potent and auspicious powers over rainfall, hurricanes and floods.

The presence of the dragon in Chinese culture dates back thousands of years. Dinosaur bones unearthed in ancient China are documented as “dragon bones,” and dragon statues and jade badges of rank have been discovered as far back as the fifth millennium BC. Excellent and outstanding people are compared to the dragon, and leaping, swooping dragons operated by a full team of people are a common sight at Chinese festivals.

This year, Canada Post honours the Year of the Dragon—a time of innovation, risk and achievement—the fifth sign of the Chinese zodiac. The dragon in the PERMANENT™, domestic-rate stamp in this series is fully embossed. Gold foil is used prominently in the dragon’s scales. Swirls, a graphic element from ancient Chinese designs, are placed at the bottom of the domestic-rate stamp to represent the water element. The Chinese characters in the top right corner spell out “dragon.”

“It’s always a challenge to find novel ways to showcase the Lunar New Year stamps,” says Alain Leduc, Canada Post Stamp Design manager. “Designer Louis Fishauf, who also designed the extraordinary Year of the Monkey stamp from the first Lunar New Year series, did a great job with all of this year’s stamp products as well. The images are complex and striking, and the foil and embossing techniques are outstanding.”

A fiery red dragon bursts from the water on the dramatic souvenir sheet bearing an international-rate stamp and imagery taken from the domestic stamp. The embossing on the dragon’s head is carved by hand, with touches of foil to give it vibrancy. The background is red, a colour symbolizing good fortune and joy that is used prominently during Chinese New Year celebrations.

The highly collectible uncut press sheet features 12 souvenir sheets. The Chinese characters on the selvedge bear the names of all the Zodiac creatures, and the calligraphy along the bottom offers greetings and wishes for luck in the New Year, in a tone similar to messages found in fortune cookies.

A couple of brand new products will appear this year for the very first time. A second souvenir sheet—a ‘transitional’ collectible—features last year’s Rabbit stamp exiting from the left, as the Dragon stamp enters from the right. Lunar New Year enthusiasts will be thrilled that a wallet-sized mini-booklet with six self-adhesive stamps is available, allowing them to keep a supply of Dragon stamps on hand for their New Year greetings. And speaking of greetings—this year for the first time, Canada Post will offer celebrants a chance to share the festive dragon that graces the stamps with friends and family with a package of Lunar New Year notecards—with ten PERMANENT™ stamps—available early in January.”

Since images are worth thousands of words, here are more… 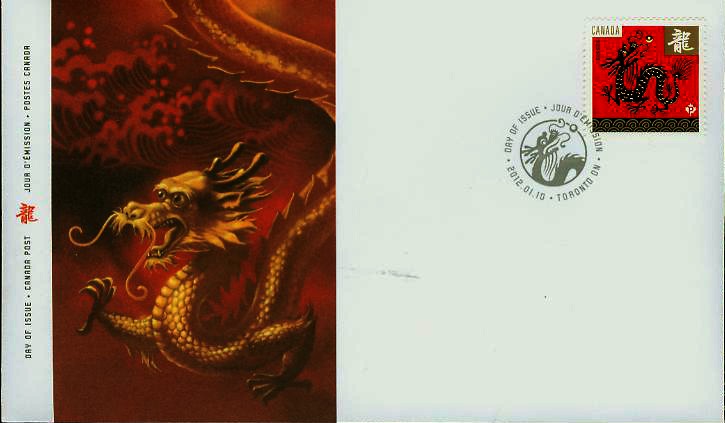 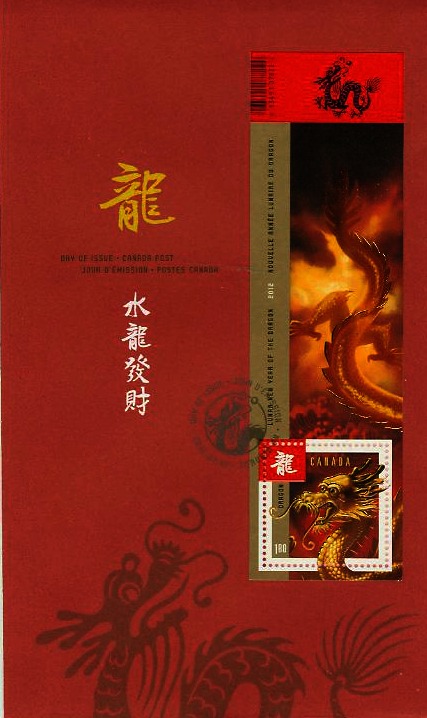 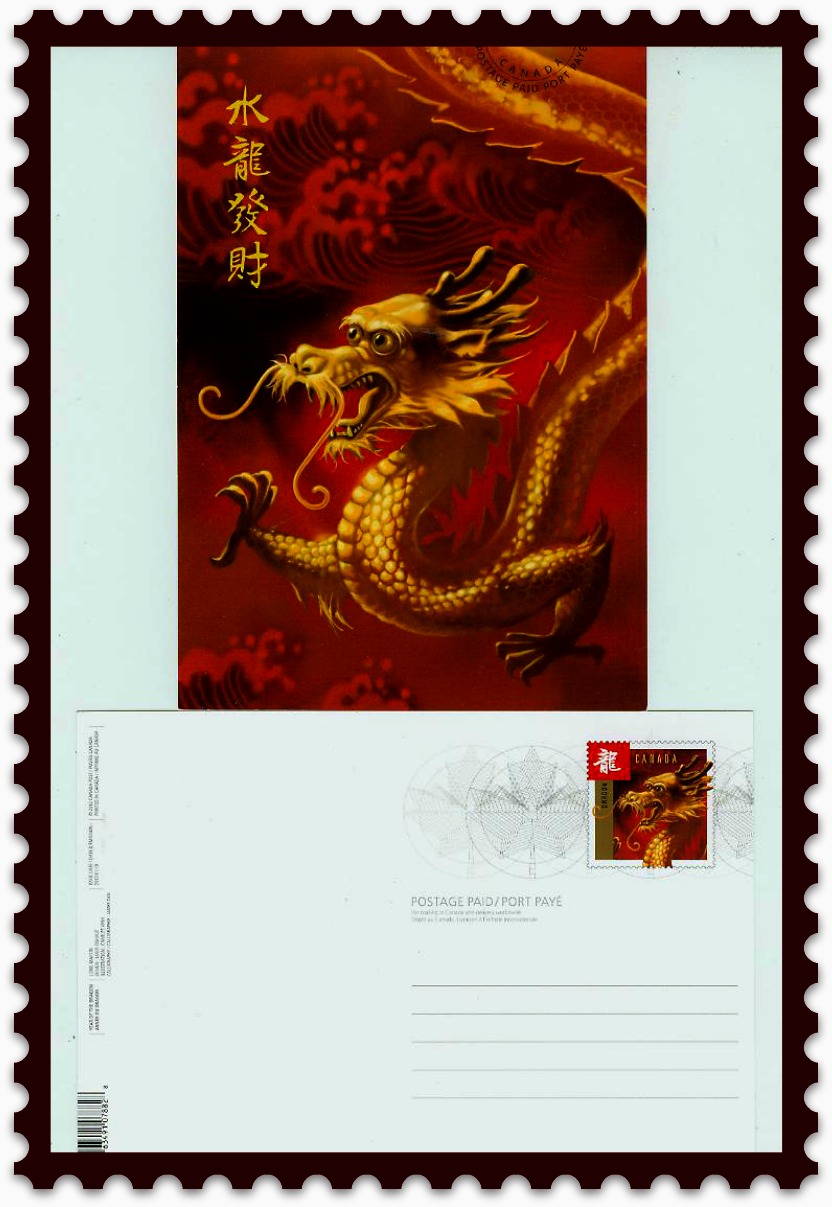 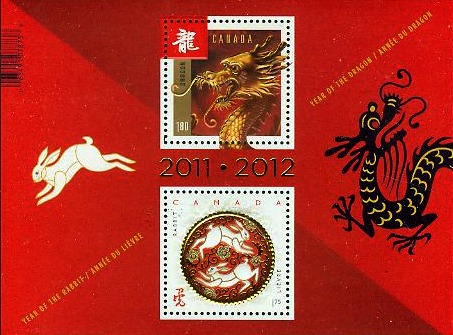 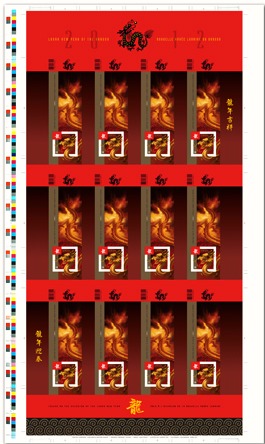 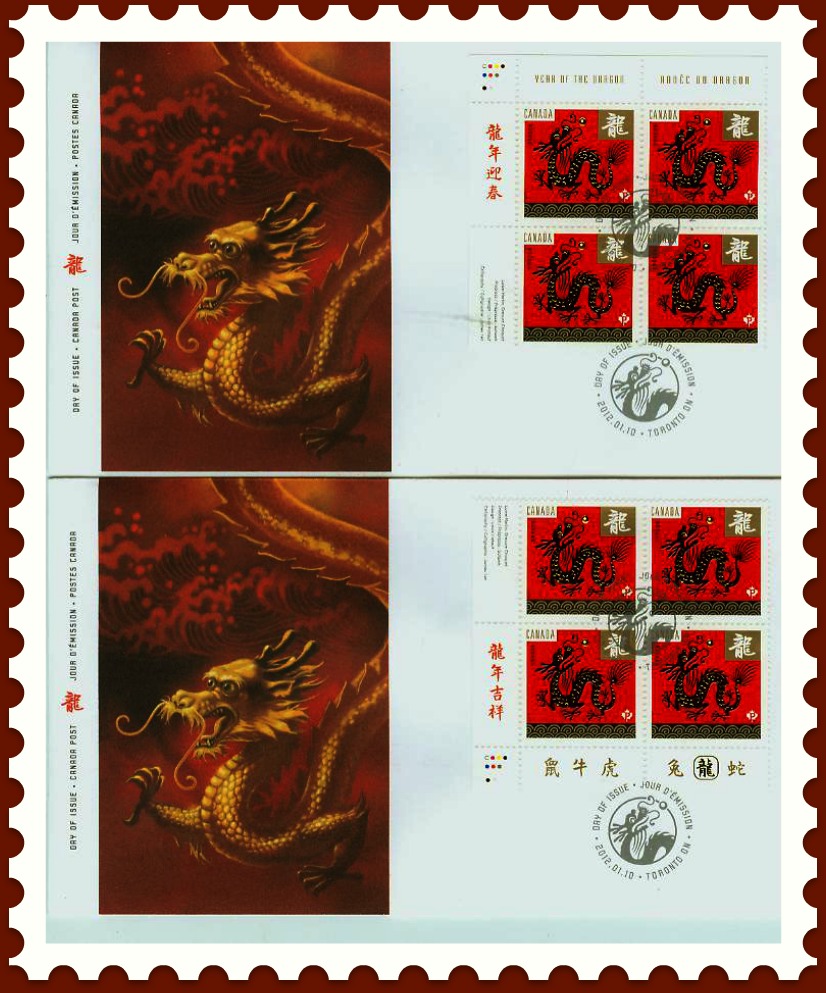 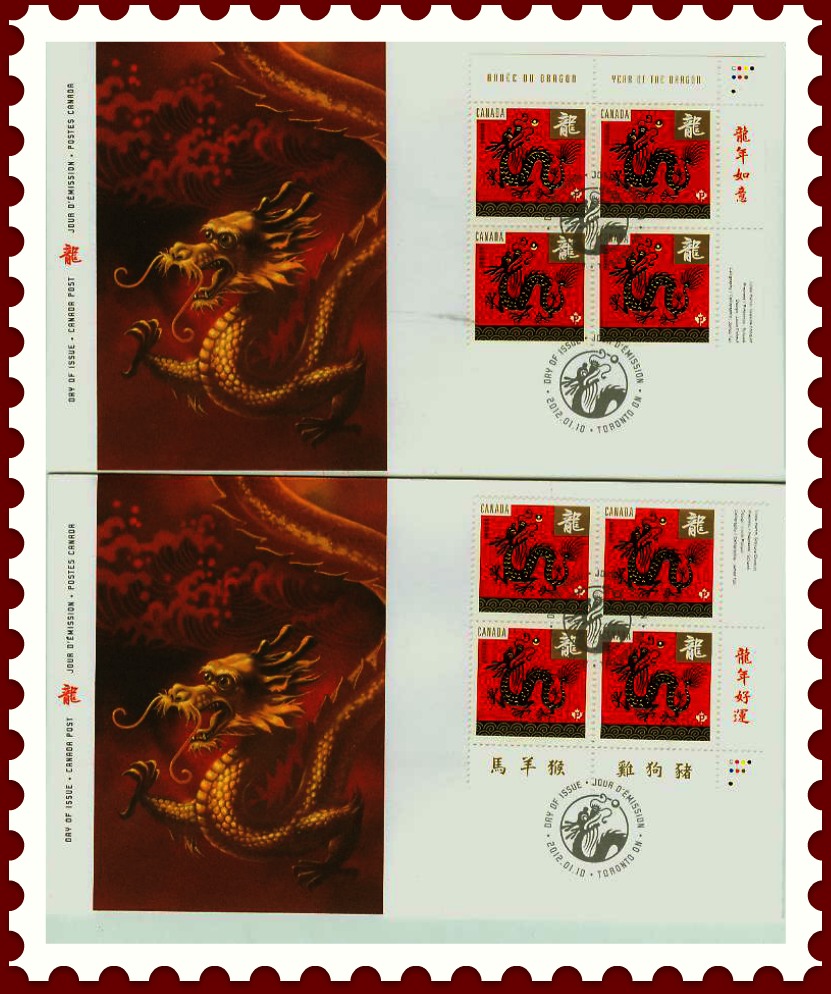 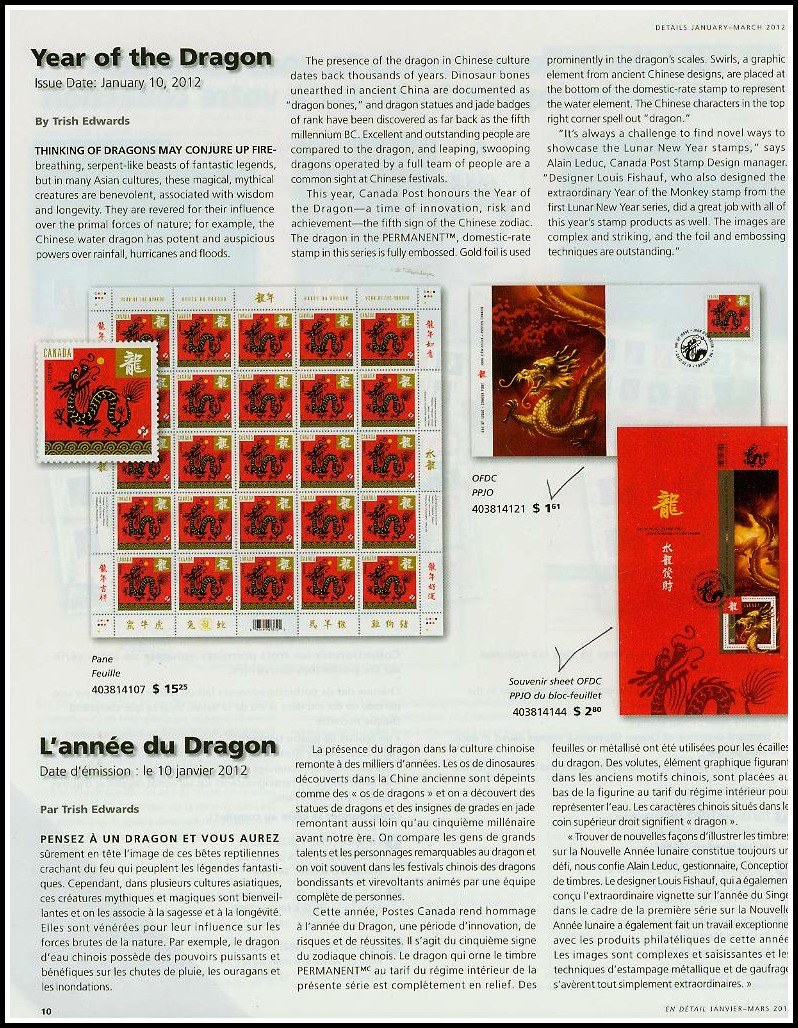 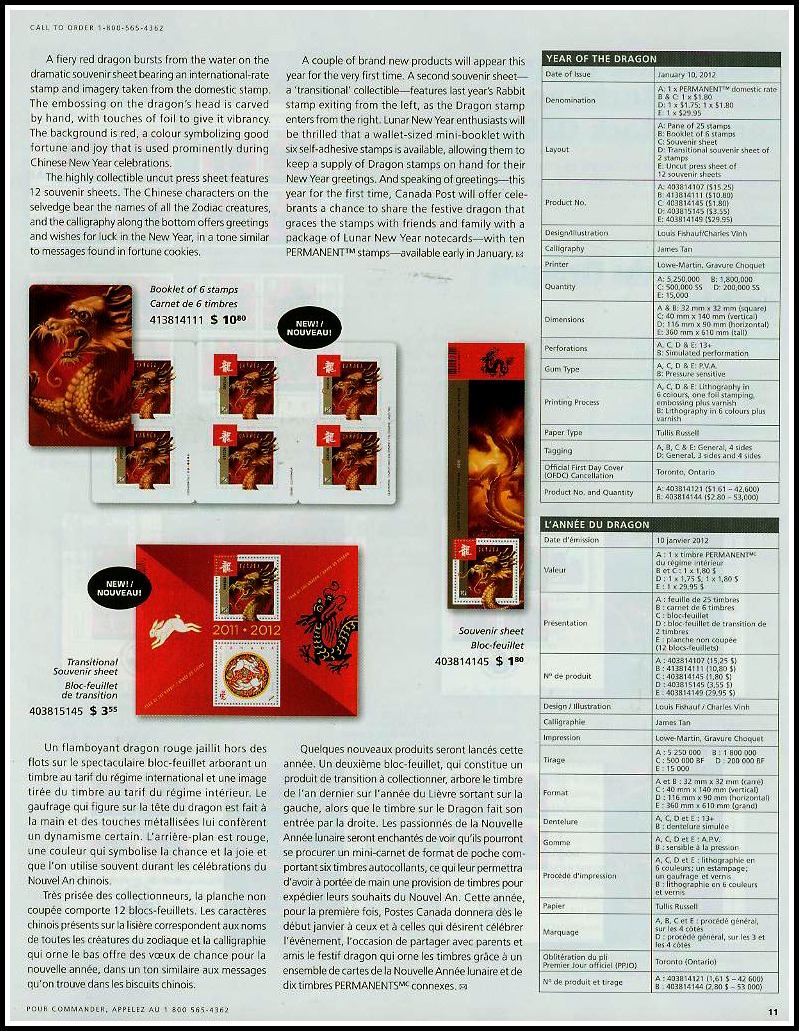