I recently stumbled upon this interesting article on stamp investing by Lily Kuo and Ritchie King on qz.com and happy to share:

(….)  Postage stamps have some of the hallmarks of any great investment craze. They’re tangible assets for those concerned about global economic stability. They’re rare. And the Chinese government has been promoting its citizens’ interest in them.

By all available indicators, the value of stamps is surging accordingly. Investment-grade stamps return between 10% and 12% annually according to Nick Salter, a stamp investment specialist who runs the website Philatelic Investor. Britain’s Stanley Gibbons, the world’s oldest rare stamp dealer, is starting an investment fund for rare British stamps, which the firm says will return 10% a year. On average, the GB250 Rare Stamp Index has risen 13.9% a year (in compound annual growth) over the past decade. Since the financial crisis, the return has been even better—and, as you can see from the chart below, has outperformed other major investments since 1995.

Postage collecting has been around since the first postage was printed in the mid-1800s. Some believe the growth in stamp investing is driven in part by Westerners born after World War II who studied philately in school and are now collecting stamps in their retirement.

Today, there are an estimated 50 million stamp collectors worldwide.

Hedge funds and wealth managers are also looking to stamps as an alternative asset that doesn’t follow stock market trends. That’s partly because collectors tend to hold onto them, and their buying and selling isn’t triggered by changes in the economy. In China, investors with limited access to equity markets are pouring money into tangible assets like stamps, art and tea. (Also, in 2000, the Chinese government started promoting stamp collecting to encourage interest in Chinese history.)

Some of the most valuable stamps traded today are from India, China and Europe. One particularly valuable stamp: The Swedish Treskilling Yellow, a tiny three-shilling stamp accidentally printed in yellow, which sold for £1.6 million ($2.1 million) in 2010. 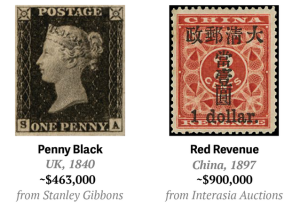 To meet rising demand from emerging markets, Stanley Gibbons has opened offices in Brazil, Singapore and Hong Kong this year. The firm says Asian investors account for about 5% of stamp sales in terms of volume but 18% in value (paywall).

The market isn’t without risks. A speculative stamp bubble burst in the 1970s, when prices fell as much as 50%. It took stamps two decades to recover. Rare stamps aren’t guaranteed to increase in value, especially if they fail to attract more young philatelists. The market for Chinese stamps looks particularly dodgy. The value of Chinese stamps issued after 1949 increased by 10- to 30-fold in 2009 and then plummeted in 2011 before stabilizing last summer, according to Louis Mangin, director of stamp auctioneer Zurich Asia.